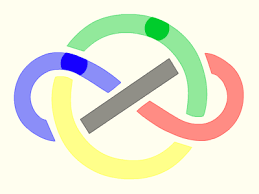 I really liked the following quote from Dr. Viorel Barbu, who is the President of the Mathematics Department at the Romanian Academy and a participant in the first IMO: “Mathematics has always been a fresh and dynamical field of human creativity and a fundamental science to the benefit of scientific knowledge and technical achievements. It is the role and duty of young mathematicians to bring and develop new ideas and to construct new bridges between mathematics and other scientific fields.”

I always wondered about the contribution of IMO participants to the field of mathematics and science overall. I came across this fascinating research from Dr. Agarwal and Dr. Patrick Gaule. These researchers analyzed data examining the career and scientific output of the participants who competed and performed well in IMO over 20 years period. This research points to a very positive correlation between the points scored at the IMO and the mathematical knowledge produced, which was measured by the number of mathematics publications and mathematics citations. It also proved that students who performed well on IMO are more likely to become professional mathematicians as measured by getting a Ph.D. in mathematics.

I found some really interesting observations in the research, listed below:

–Strong performers at the IMO have a disproportionate ability to produce frontier mathematical knowledge compared to PhD graduates and even PhD graduates from elite schools.

-The conditional probability that an IMO gold medalist will become a Fields medalist is two order of magnitudes larger than the corresponding probability for of a PhD graduate from a top 10 mathematics program.

This research paper clearly articulates the contributions of IMO participants to the field of mathematics. This is why I encourage everyone to participate in math competitions beginning elementary school, and through college, as problem-solving skills acquired through participating in math competitions have long lasting positive effects that helps you whether you pursue a professional or academic career.

I researched the gender distribution of participants from all participating countries over the past 55+ years and it shows encouraging trends of female qualifications in IMO including female Gold Medal winners over the last two decades as compared to before. 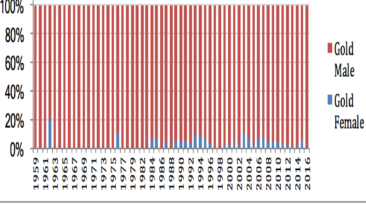