The United States of America Mathematical Olympiad (USAMO) is an invitation only high school mathematics olympiad that is held annually in the United States. USA(J)MO serves as the final round of the AMC 10/12 contests. USAJMO was introduced to qualify students based on their scores in AMC 10+AIME exams where as USAMO qualification is based on AMC12+AIME exam scores.

MAA (Mathematical Association of America) was kind enough to provide me with various statistics of USA(J)MOs for the past five years. Unfortunately, given the drastic drop in number of female students who qualify for the AIME, the trend of female qualifications in USA(J)MO is equally discouraging. As you see below, the qualification of girls have stayed mostly constant over the past five years. Each year nearly 500 students qualify for USA(J)MO and the average number of girls who qualify has stayed constant ~10%. 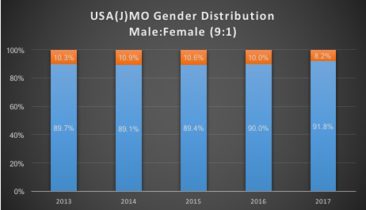