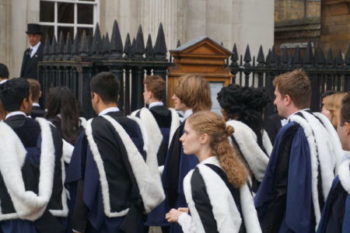 As per the university website under their diversity section, Philippa Fawcett came to study mathematics in 1887, and “In 1890, Philippa Fawcett scored the highest mark of all the candidates for the Mathematical Tripos. A severe test of both mathematical skill and stamina, the Tripos was examined by twelve three-hour papers, taken in close succession and requiring in depth answers to complex and diverse questions. The subject was still largely considered to be a male bastion and Philippa’s unprecedented success raised some uncomfortable questions. ”

I came across this article and was surprised to see trends similar to other selective schools regarding how many girls pursue math as a major even though Phillippa set a great example nearly 130 years ago. Still only one of out 6 students admitted in the Cambridge math undergraduate program are girls.

Professor Julia Gog’s (member of the Maths Undergraduate Admissions Committee) commented that “gendered interests and roles are shaped by external forces from even the first few months of life, and I firmly believe this is limiting the number of women in STEM subjects in this country. While we can and do work hard in our outreach in attracting applicants of all kinds, clearly that can’t cut through a lifetime of being implicitly (or occasionally explicitly) told that maths is not for people like you.” This is very consistent with all the research done on this topic, even in the United States, as I have covered in my previous blogs.

I am encouraged that the university is taking steps with the Women of Mathematics exhibitions and several other programs that are targeted specifically at women which have helped making women more visible and providing role models to current and future students.